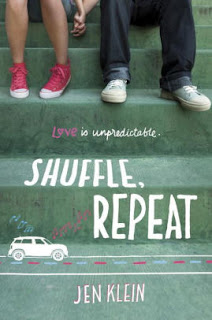 NOTE: Apparently this author writes for Greys Anatomy so you know it’s got to be good : )


MY THOUGHTS
I hate to hype books, but I have to say Shuffle, Repeat has got to be my favorite contemporary, ever. How do I know this?


It's because Shuffle, Repeat is the only one I´ve read more than once, and I enjoyed the novel the second time around as much as I had the first.


It surprises me that I liked this book as much as I did. Especially because it has the same cliques that you can find in most contemporaries:

The story is not very unique, and neither are the characters, but I was still really invested in the novel. We are introduced to June, our female MC, who wants nothing but to get high school over with it and face the real world. She’s a great student and she can’t help but look down on those who aren’t as smart her, or seem to be that way. Oliver, on the other hand, is all about emersing himself in the high school experience. While June finds no importance in high school events such as football games or Prom, Oliver is all about them. This is where their differences begin.


June and Oliver’s moms are best friends and they decide to have Oliver drive June to school every. day. Since June doesn’t have a drivers licence yet, she has no choice but to listen and our two leads find themselves arguing over everything on the ride to school. At first, it’s over what music to listen to. Soon, they’re arguing over whose perspective on the value of high school is more true. As a solution to this music problem, they come up with a game: whenever one of them makes a good point regarding their view on the importance of the high school experience, that person earns a song of their choice for the car ride playlist. Because that’s how people usually solve arguements, right?; )


As their competion for dominance in their shared playlist progresses, Oliver and June get more comfortable with each other. Pretty soon, they’re acquintances and maybe even friends. Of course, there is the drama preventing them from actually getting together, like any other contemporary, but it doesn’t take the spotlight away from Oliver and June hilarious interactions.


What’s great about June and Oliver is that their feelings are genuine and progressive; it’s not a quick transformaton from hating each other one second to each other’s confidents regarding their darkest and deepest thoughts. I was so invested in their banter and how they gradually became closer and closer, that all cliques were forgotten.


Also, if anything the senior pranks in Shuffle, Repeat alone should be enough to have you wanting to read this novel.

“Their sound is rough but that’s the point. It means something. It’s real”
― June on Punk Rock

Despite its very obvious plot, Shuffle. Repeat was good enough to have me reading in twice. Simply put, it is fun to read. It will make you smile because these characters can be hilarious and cry  because some of them are perfect and you know they can never be real ( ahem Oliver ). If you are into Sarah Dessen and Kasie West books, I gurantee you will love this novel.


Check it out at the library and goodreads :
https://www.goodreads.com/book/show/26067503-shuffle-repeat

Posted by SBPLTeens at 6:47 PM