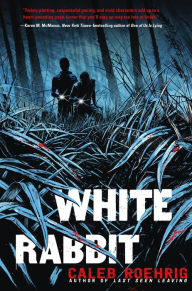 This is the second book after “Last Seen Leaving” debut mystery by Caleb Roehrig. This book is a nail biting Y/A thriller in every sense of the word. An engrossing murder mystery which kept me on the edge of my seat for the whole time I was reading the book. I had no idea who the murderer was until the very end of the book.

The plot takes place over the course of one night, as the main character Rufus young,heartbroken,rage prone  gay, was dragged from one dangerous situation to another as he investigates the murder of a rich kid with the prime suspect being his half sister.
What I don’t like about the book is that it felt quite rushed. The whole book took place in the span of less than twelve hours, plus there were these flashbacks which made it very hard at times connecting me with the story or any of the characters for that matter.

Overall I enjoyed reading this thriller/suspense book. It has its flaws, but  for the most part I was always intrigued. So if you like murder mysteries  and twisty characters this book is for you.