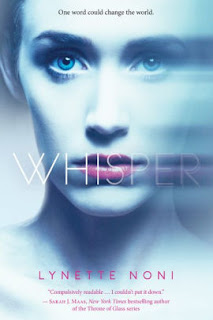 Lynette Noni effortlessly combines Stranger Things and the Divergent trilogy in her new young adult and science fiction novel, Whisper. Although I am not a big fan of science fiction, Whisper has changed my opinion for the better. This book is one you will never be able to stop reading; the plot is just so unique, and each and every character is quirky and lovable.

Something that just makes Whisper so much more special when compared to other books is its narrator, who we know as “Jane Doe.” Captive and imprisoned in Lengard, a psychiatric facility, Jane refuses to tell anyone her real name, since she does not speak. The officials at Lengard go to great lengths to pry for more information about Jane and her background, but she has successfully been silent for more than two years -- far longer than any other resident in the ward. Jane simply has no clue as to why she is in Lengard in the first place; she is only told that the facility is for extraordinary people like her. Unfortunately, Jane gullibly believes these lies and continues to remain silent. Things seem to be going as per routine until Jane realizes that she is assigned to a new evaluator -- Ward. The two gradually become friends, something that feels odd to Jane, as everyone she has come into contact with has been cold and distant. Jane, who doesn’t have close friends at Lengard, finds her icy exterior slowly chipping off when she talks to Ward. Ultimately, by the end of the novel, Jane finds the truth and understands why she is imprisoned and controlled by the government. The question is, does she ever know whom to trust?

This book captivated me from the start; the plot was enthralling and unique. I have to admit, as soon as I started reading, I found Jane weak and annoying, but she certainly became admirable by the end of the novel. It’s such a shame that it took nearly 100 pages for her character to develop.

I would give Whisper a rating of 3.5 stars out of 5, but that’s only because of the rather slow plotline towards the beginning and Jane’s initial nature. Honestly, I felt like 75% of the novel was action-packed and exciting, but the background and the descriptions of Lengard itself were a bit too dry for me. Overall, though, I would love to read the next book in this duology. I guess I just have to wait until it comes out.

Posted by SBPLTeens at 4:36 PM