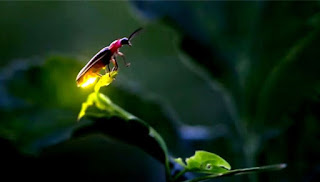 You may have noticed these cute, flashy bugs taking over the night these last
few days. Enjoy the light show while you can, because these guys won’t be around for
much longer. It’s only for about two weeks in a year Fireflies emerge to dazzle us with
their glow. While it’s a magical manifestation for us, this ritual of brightness is the prime
of a Firefly’s life. And it’s what the fate of the entire species comes down too.
Fireflies remain hidden for the entire year, emerge in late June, and disappear
around mid July. All year long, these bugs spend their time in the Earth as larvae,
commonly known as glowworms. While in this state, the bugs are flightless, but they
still bear the signature light-up butt. Glowworms use this light to ward off potential
predators. Not to mention, they aren’t the tastiest species around. Glowworms wander
about in the dirt, feasting upon other bugs, decomposing flesh, or even one another.
The larvae do this for about two seasons. In early winter the larva turn into pupae,

similar to butterflies. They remain in a chrysalis in underground chambers for as long
as two years, before emerging as flashy fireflies.
Sadly, the life of an adult firefly doesn't span much longer than a few weeks, with
some dying out around ten days of age. During these days as fully-grown Fireflies,
breeding is the one goal all these bugs have in common. Some will continue with their
carnivorous larvae diet, and others transfer to a diet of flowers. Many Fireflies,
however, do not eat anything. As adults, light bugs are on a biological time clock to
breed. The most popular, noticeable, and successful breeding time are the two weeks
we see these beetles in the summer. During these two weeks, Fireflies flash and dance
about the sky, competing for a potential mate.
Fireflies, both male and female, have the obvious gift of bioluminescence, aka
glowing. Fireflies produce light by mixing the chemicals oxygen, calcium, ATP, and
luciferin. No heat is produced by this light, so the fireflies are safely able to shine
without burning their bums off. When night falls, male Fireflies take flight with one goal
in mind: to impress a female. They will soar high and shine their brightest in an attempt
to allure a mate. Females watch the show from the grass below, trying to decide who
would be the best father, genetically speaking. The brighter the glow and the higher the
fly, the healthier the male. The healthier the male, the healthier and more likely to
survive his offspring would be. To produce successful offspring is the main goal for all
Fireflies. Female fireflies are quick to respond to the healthier males. They flash back
to signal they are impressed with a certain male.
After a female firefly has selected a male, she will lay a few hundred eggs in
shallow, damp soil. Her life ends not long after. But within a month, those eggs will
hatch into glowworms, and the life cycle of Fireflies continues.
Despite the balanced, ever-going cycle of Fireflies, there are less and less
Glowworms hatching every year. This is mainly due to human intervention. We all like
to watch Fireflies shine and dance through the sky, but we may be the cause of this
species demise. Do you leave your outdoor lights on late into the night? Leaving these
lights on may be obscuring fireflies’ view of one another, and they will be unable to
produce eggs as such. Do you use pesticides or toxic fertilizer on your lawn or garden?
If so, you may want to halt on this for the Fireflies’ breeding season. Fireflies and their
larvae need an adequate place to eat, sleep, and shine. A poison-filled field may not be
the best option. Do you over-mow or over-clean your lawn? Fireflies thrive better in

dense, forest-like areas. If you want to see more Fireflies in your yard in coming years,
try letting these Firefly friendly habitats accumulate in your yard.
If you want to catch and study these flashy bugs, it’s quite easy! Upon spotting
and tracking a Firefly, simply approach it and gently cup your hands around it. As long
as you don’t eat your new flashy friend, you won’t get sick. Let the Firefly crawl on your
hands for a few moments, before it flies off into the night. But if you want to keep the
Lightbug for a little longer, simply plop him into a large container with air holes and a
grass base. While the container is adequate for a few Fireflies, be sure not to
overcrowd the given space, or keep the Fireflies in there for more than an hour. But in
the meantime, enjoy watching their mini lightshow in your bedroom.
Truly, Fireflies are a sight to behold. They are beautiful, unique creatures,
undeniably. They shine and allure us, as though they are things from a dream. They
captivate every young and curious soul with their bums. They bring us spectacular
sights and fond childhood memories of Summer eves. The times we chased Fireflies
across moonlit fields were the closest we’ve ever come to catching stars. For
generations to come, kids will continue to chase these stars across the street and
through the fields. And through all that, Fireflies will continue to shine.

Posted by Saleena Davidson at 11:37 AM