Review of Sorrow Fierce and Falling by Jessica Cluess, reviewer is Srinidhi Gopalan 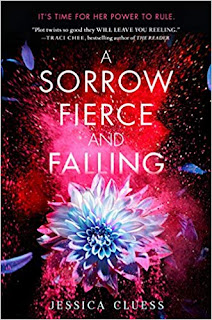 I enjoyed reading A Sorrow Fierce and Falling by Jessica Cluess. I found myself feeling and connecting
with Henrietta, the main character, in the novel. I felt her emotions of nerves as she awaits her marriage
and felt frustrated for Henrietta when she endured the various problems and her relationship with
Blackwood. However, I felt as if the plot was all over the place.
At times, it was hard to follow along with the storyline. Certain times, the setting would switch abruptly
or certain parts of the story would seem repetitive or redundant, making me lose my interest in reading
at times. I felt as if Henrietta’s, personality was prominent, and the whole idea of her quest to chose
her love and the power she has on the fate of kingdom are interesting issues throughout the novel,
which then led to a conclusion I thought was unexpected.
However, Henrietta did not really change at the end of the novel too, and as a reader, I often enjoy
reading about more dynamic characters, so I would’ve loved for her to progress as a character too.
It was a good book, but definitely not an award-winning novel due to some confusion in the plot,
and how it could easily get boring in the middle. Finally, Henrietta could have been developed a
little more. I would rate this book a 3.5 on a scale of 5 based on some flaws but some good aspects
of this novel. Despite these flaws, it was an interesting and fun read.
Posted by SBPLTeens at 3:11 PM