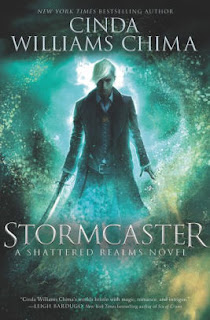 Author: Cinda Williams Chima
Rating: 3/5: Decent novel
In a sudden whirlwind of chaos amid mystery, life can thrust anyone into a different world.  For Evan, an orphaned, magemarked, 13 year-old pirate lad, as such is the case.  He's lived a life as adventurous as any low-ranking pirate in the land of the Seve, Realms, but when his ship is overrun by Celestine, the land’s cruel and ruthless overlord, he finds himself on the run.  Through betrayal and danger, the lad discovers his mage (magic-induced) power: Stormcasting. The seas, winds, and skies are Evan's to command. Even with his power, however, Evan is not safe. For four grueling years ahead, power, love, and magic will be Evan’s to conquer.
The novel introduces new characters, return old heroes, and bring the tyrants into knees so the Seven Realms may once again be safe and just.  There’s an armada of characters waiting to be met, and a rollercoaster of events waiting to spiral down. The book is mad and complex when it comes to building lore, and a surprise seems to lurk around every corner.


Honestly, this story is quite a decent, interesting, creative one! Characters, character arcs, vivid descriptions, bejeweled writing, and occasional themes manifest a fantastic piece of writing!  Though most characters have well-relayed personalities, many do stay static, and the story lacks a theme. Nevertheless, the adventures within the book and emotionally-driven plotline really called for a  great story!

Posted by SBPLTeens at 6:58 PM